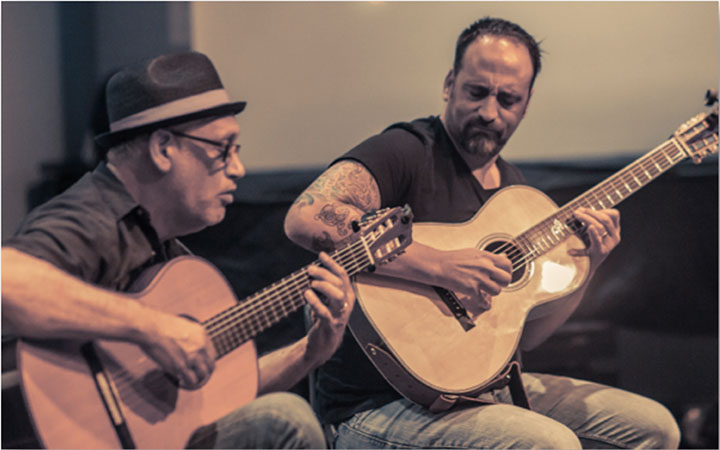 Eric Skye and Mark Goldenberg – these two acoustic guitar masters will be playing one of their rare duet performances at Hoffman Center for the Arts in Manzanita March 3rd.

Come listen to them in the intimate setting of Hoffman Center.

Though often billed as an acoustic jazz guitarist, Portland Oregon based Eric Skye occupies a unique niche between jazz, Americana, and blues. He plays in an original style, threaded together with a healthy respect for the groove, and a love of unadulterated acoustic tone. Skye’s most recent solo release, A Different Kind Of Blue, a solo guitar re-imagining of Miles Davis’ Kind Of Blue, was listed in the top ten acoustic albums for 2012 by Acoustic Guitar Magazine, and acknowledged by the Miles Davis family. Eric was honored five years ago with a signature model guitar from the Santa Cruz Guitar Company that has gone on to be one of that company’s best sellers.

Los Angeles based Mark Goldenberg is the consummate A-list session player and sideman. Mark played lead guitar for Jackson Browne for sixteen years. He has played on records for and toured with artists including, Bonnie Raitt, Linda Ronstadt, Eels, Chris Isaak, Willie Nelson, Peter Frampton, and many others. Mark recently finished a two year world tour with acclaimed pianist and actor Hugh Laurie. He is also a songwriter, whose works have been recorded by Linda Rondstadt, Chicago, Pointer Sisters, Natalie Imbruglia, Eels, and Chris Botti.

“These two fine guitarists have put together eight tunes where their fertile musical minds create inventive textures and dynamic harmonic landscapes from beginning to end. Honestly, it took several listens before I began to hear a good amount of what they are doing, and it will take many more to unpack it further.” -Minor 7th Magazine