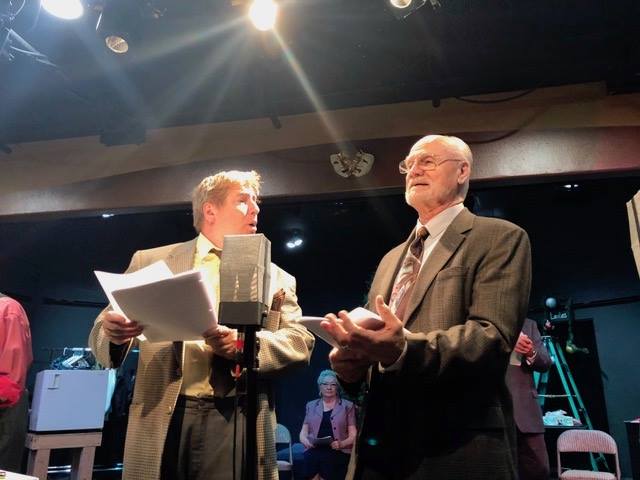 It’s not the holidays until you see “It’s A Wonderful Life.” What better way then to see it on stage, at North County Recreation District Performing Arts Center? Opening December 6 for three performance only!

TICKETS:
$14 online in advance at tickettomato.com or $17 at the door

This reader’s theater production features a diverse cast of voices, in alphabetical order:

Dave is wrapping up his 12th season with the Riverbend Players. It has been a busy year for the Wheeler resident. He was in last winter’s performance of It’s a Wonderful Life. He followed that with Four Weddings and an Elvis earlier this year. Then came Moon over Buffalo and finally this reprise of IAWL.

Stephen Jackson-Clark is thrilled to be appearing for a second time in this play! After 34 years of teaching and directing Drama students at Portland area High Schools, he was lucky enough to be able to move to this beautiful area last year. Stephen has been a fan of radio plays for as long as he can remember, and he hopes to continue his involvement with the great arts community here. Happy Holidays!

Scott Fisher studied drama and music in high school and college, then spent 30 years earning a living and raising a family. In 2006, he returned to the stage in Tualatin before moving to the Oregon Coast in 2017. Scott’s last performance at NCRD was in The Riverbend Player’s production of “The War of the Worlds,” and he is delighted to be part of “It’s A Wonderful Life” this holiday season.

This is Jenny Greenleaf’s second on-stage part in a Riverbend Players production. While she hasn’t acted in a play since high school, she attributes her ability to perform readers theatre to her experience doing all the voices in the Harry Potter books while reading them to the children. Jenny also enjoys helping Riverbend Players with selective marketing materials and playbills.

After retiring from teaching, Mike Kingsbury and his wife, Kathy, moved to Rockaway Beach. With no experience in theater, he tried out for and played several roles in a production of War of the Worlds at NCRD. He is excited to provide a variety of character voices in this year’s production of It’s a Wonderful Life.

Mary became involved with theater in the early 90s as the musical director for a community theater production of Gypsy. More recently she has acted with the Riverbend Players in Vintage Hitchcock (Winnie) and helped with the lights and sound for several other productions.

Candace has been playing with the River Bend Players in The Curious Savage, Case Of The Hopeless Diamond, Check Please, Love Lost and What I Wore since 2010. I moved to Manzanita in 2008 from Cannon Beach where I was involved with the Coaster Theater Playhouse. The Rose Vendor in Oliver was my most memorable part with them. And back in the 1960’s I acted in high school where I was first bitten by the acting bug. Being on stage entertaining others has been such a fun endeavor.

Riverbend Players is a registered 501(c) (3) non-profit organization bringing vibrant community theater to the north county and beyond.