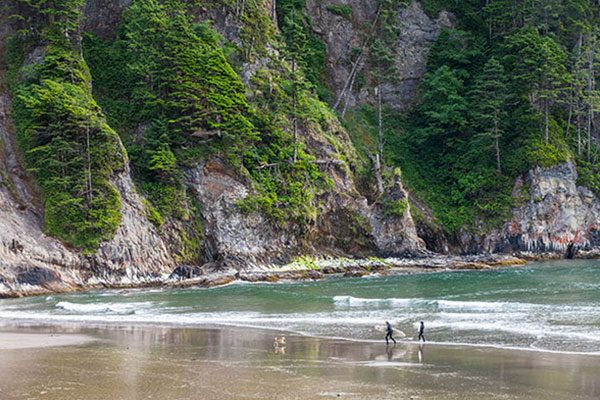 Oswald West State Park is a place of boundless natural beauty; winding trails, lush undergrowth, regal trees, and breathtaking vistas of sea and sand. Stretching along four miles of coastline north of Manzanita and Neah-Kah-Nie Mountain, this 2,500 acre preserve is the Oregon Coast’s Walden; a place of quiet contemplation and regenerative power. Like its namesake, a former Oregon governor, it is an essential link to the state’s legislative history.

Born in 1873, Oswald West was raised in Salem. In 1911, he was elected the 14th governor of Oregon. During his one term, he proved to be a proactive legislator, most notably in his establishment of the state’s beach highway law. It proclaimed the entire Pacific coastline – today’s Highway 101 – a public highway, effectively preserving scenery for future generations. For laying this foundation, Oregon writer Stewart Holbrook labeled West “by all odds the most brilliant governor Oregon ever had.”

The park that bears West’s name saw its genesis in 1931 when 118 acres were donated to the State of Oregon under the name of Short Sand Beach State Park. A flurry of donations and purchases followed and the park was renamed in 1958 to honor Governor West’s landmark efforts on behalf of Oregon’s beaches. With the park was in place, others would step forward to ensure it was able to live up to the standards West had envisioned.

Matt Kramer, a journalist for the Associated Press, penned a series of articles extolling West’s vision of publicly-accessible beaches. These led to overwhelming support for the Beach Bill, passed in 1967 behind Governor Tom McCall. A memorial honoring Kramer’s efforts overlooks Short Sands Beach, reminding passerby of the power of the pen as they take in the bounty of the surrounding natural treasure. The memorial reads: “The people of Oregon hereby express their gratitude to Matt Kramer of the Associated Press, whose clear and incisive newspaper articles were instrumental in gaining public support for passing of the 1967 Beach Bill. This landmark legislation guarantees forever the public’s right to the free and uninterrupted use of one of Oregon’s most popular recreation attractions, its ocean beaches.” Oregon author Matt Love recognizes the significance of Kramer’s reports in keeping West’s vision in the public eye. “He kept reporting on the near-fatal death of the Beach Bill,” Love said. “His work galvanized the public attention that kept the bill alive.”

Today, the park’s stunning beauty continues to draw visitors who share in Governor West’s ideals with each visit. Though camping is no longer permitted, there are endless trails that offer every skill level of hiker something at which to quietly marvel.

A trail winds up Neah-Kah-Nie Mountain for a magnificent view of the Pacific and the communities to the south. Another runs north from Cape Falcon on a beautiful stretch up to Arch Cape. Or, the two mile Cape Falcon Trail begins at the northwest parking lot along Highway 101. A short half-mile hike gives way to a brilliant overlook of Short Sand Beach. There, the trail forks to Cape Falcon, where on a clear day you can see north to Tillamook Head and south to Cape Lookout. For the more adventurous, a 13-mile stretch of the Oregon Coast Trail winds through the park, from Arch Cape to Manzanita.

The most accessible of the trails, Short Sands Beach Trail, winds through old growth from the south parking lot and lands hikers at a serene picnic area. Here, you find the essence of the park; swaying trees, gentle waves, and endless opportunities for driftwood fort-building. A popular cove with surfers, several are always bobbing in the waves. During summer months, it is a crowded stretch of soft sand where families build sandcastles and play Frisbee; in the fall and winter, it quiets considerably as it waits for thundering surf and lashing rains. The beauty of Oswald West State Park is not limited by season.

Thoreau wrote “Our life is frittered away by detail. Simplify, simplify.” Oswald West State Park offers visitors that chance. It invites people to wander its paths and beaches, talk to its trees and streams, and sit amongst its ferns and rocks. In return for this boon, it asks us to speak softly when there is something to say, and say nothing when words aren’t needed. Tread lightly and pay attention. Show others the paths and trails and make them mindful of each turn and contour. Above all, remember those who bestowed this gift to Oregon.