No RV? No Tent? No Problem! 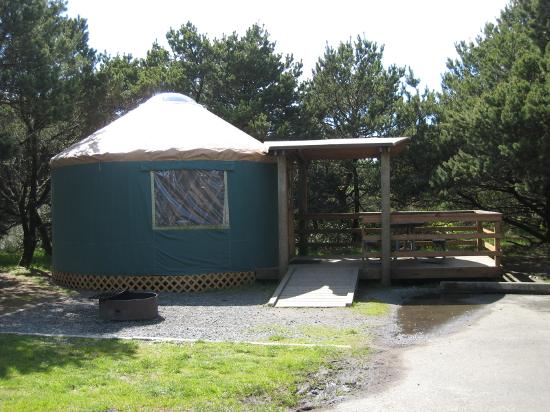 Do you cringe at the thought of setting up a tent? Is your camping budget not large enough to invest in an RV? If so, meet the yurts at Nehalem Bay State Park, circular domed tenst with a plywood floor, sturdy walls, electricity, and a skylight. Yurts give campers a cozy place from which to experience the North Coast’s great outdoors. Roughing it has never been smoother.
Yurts are a national phenomenon that broke into the camping scene in the Pacific Northwest. Yurts have become an especially popular and comfortable way to camp in the winter, due to their ability to withstand high winds and retain heat. They allow campers to extend their traveling season without having to risk discomfort on a rainy day by pitching a tent. Nearly all of Oregon’s state parks feature yurts, including Nehalem Bay State Park. 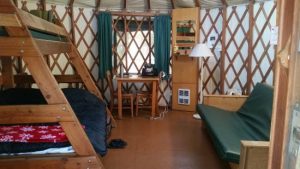 The history of yurts in coastal campgrounds dates back to 1993, when Craig Tutor, then-Oregon State Parks Northwest Regional Manager, came across a model on display at the Oregon State Fair. The design, based on a traditional Central Asian nomadic structure, was well-suited for rugged travel and harsh weather. Intrigued, Tutor approached the model’s designers from Cottage Grove-based Pacific Yurts about integrating them into the parks.
Tutor was convinced that yurt rentals would be the ideal way to encourage more people to visit the parks along the state’s coastline during the traditionally slower off-season. From November through April, the weather on the Oregon coast is less than desirable for tent camping, meaning parks were underutilized by the public and revenue from campers plunged. They would also help address park’s tight budgets by generating usage fees. 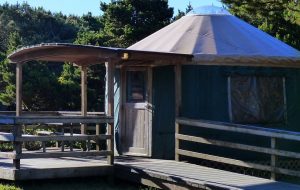 Yurts such as this offer easy camping at Nehalem Bay State Park, near Manzanita, Ore.

In November of 1993 Oregon State Parks ordered two 14-foot diameter yurts and set them up at Cape Lookout State Park. The idea was to see how they withstood severe winds and driving rain. They would also solicit public opinion from initial users. Installed in January of 1994 with just word-of-mouth advertising, the two little rentals steadily gained in popularity.
The yurts stood strong in howling winds and quickly began booking up due to their unique appeal and comfort. Users loved the feeling of the round space, abundance of natural light and being close to nature while being protected from it. In addition, the minimal footprint of the structure appealed to conservationists. The success of the experiment led to the state parks purchasing another fourteen yurts in July of 1994 for several coastline parks.
Soon, yurt reservations swelled noticeably, compelling Oregon State Parks to install another fifty yurts in winter of 1995. Today, Oregon State Parks have nearly 200 yurts in their system. Additionally, according to Nation’s Business, they are “the biggest money-maker to hit Oregon State Parks since campgrounds were introduced.” In difficult economic times this means more revenue to help keep parks open for public enjoyment year-round.
Many of the yurts are fully ADA accessible, available to campers with disabilities. In addition, designated yurts recently began allowing pets inside for an additional fee, including two of the 18 yurts at Nehalem Bay State Park.
Yurts have evolved with the times. They come furnished with basic beds, heat, electricity and furniture. Larger units boast even more amenities, such as large porches. Campers provide their own linens and cookware. 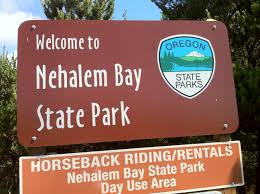 To find a list of North Coast campgrounds with yurts, rates, policies and to make a reservation year-round, choose the following options:
For Oregon state parks, www.oregon.gov/oprd/PARKS. Select ‘Yurts and Cabins’ and click on individual parks to make a reservation. Phone reservations can be made by calling 1-(800)-452-5687.
The Manzanita Visitors Center has information on Oregon State Parks yurts. You can also call Nehalem Bay State Park directly at (503) 368-5943.