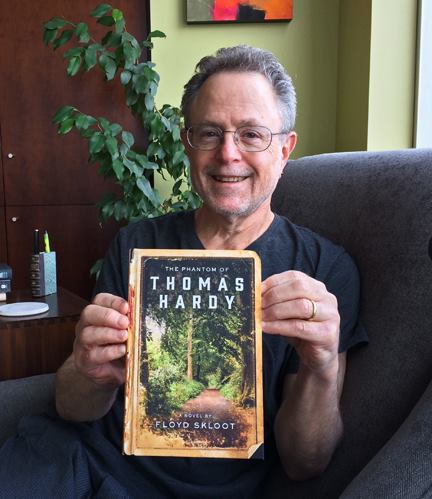 Award-winning author and part-time Manzanita resident Floyd Skoot will read from his new novel, “The Phantom Of Thomas Hardy” Saturday, December 3 at 7 pm at Hoffman Center For The Arts, presented by Cloud & Leaf Bookstore.
On a street in Dorchester, England, there is a gateway between real and imagined lives. A plaque on a Barclays Bank identifies the building as lived in by the Mayor of Casterbridge in Thomas Hardy’s story of that name written in 1885. Floyd, an American writer, and his wife, Beverly, are pondering the enigma of a fictional character living in a factual building when Floyd is approached by Hardy himself despite his death in 1928.
This phantom–or is he just a figment of Floyd’s oddly damaged brain?–tasks Floyd with finding out what Hardy missed in love. Floyd and Beverly set out to discover what they can, visiting Hardy’s birthplace, home, and grave, exploring the Dorset landscape and the famous novels with their themes of tormented love, and meeting characters deeply invested in Hardy’s life and reputation. Peering into the Victorian past, they slowly fold back the clutter of screens that Hardy placed around his private life to uncover long-hidden truths about his romantic attachments and creative work. At the same time, Floyd and Beverly’s own love story unfolds, filled with healing and hope.