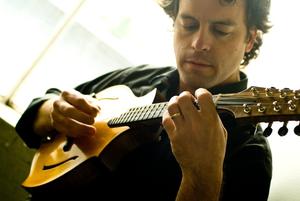 Internationally recognized mandolin virtuoso Tim Connell will headline a concert of acoustic string music Saturday, Dec. 10, at 7 p.m. at the Hoffman Center for the Arts in Manzanita. Admission will be $20 at the door. Tickets can also be obtained online at the Brown Paper Tickets website.

Connell will team up with Mike Burdette on guitar for an evening of what he describes as “Brazil, Bach, Beatles and More.”

Connell is well known to acoustic music fans as a top-tier, mandolinist, touring internationally with Mike Marshall’s Ger Mandolin Orchestra and several of his own projects, including Mando Planet and Stumptown Swing. In addition to his solo repertoire, he frequently performs with Burdett as the duo Rio Con Brio.

A graduate of the New England Conservatory of Music, Connell is regarded as one of the top North American interpreters of the Brazilian choro style on the mandolin. He has also developed his own unique voice for the instrument, described in a recent Mandolin Magazine cover story as “fiery and energetic, soulful and evocative.